Yom HaZikaron (Memorial Day for the Fallen Soldiers of Israel and Victims of Terrorism) is officially on the 4th of Iyar (this year on May 1st), though we should be spending a lifetime commemorating. Not that long ago, Jewish people were denied from colleges and prevented from owning a business because of their ethnicity or religion. The promise of civil rights and equal protection under the law are privileges that Jewish people in the West now take for granted. Today, it is Jewish and non-Jewish youth that protect the ambitions of Diaspora Jewry. The Israeli soldier, whether they are Jewish, Arab, Christian, Druze, Bedouin or other., is the concrete that secures a Jewish person’s place in the West.

The soldiers of the Israeli Defense Force are equipped to defend against any physical threat to the Jewish State. Whether the peril comes from Hamas in the Gaza Strip, Hezbollah in Lebanon, Daesh (ISIS) in the Sinai, the continued Stabbing Intifada from Palestinian terrorism in the West Bank, or from new Iranian proxies on the Golan Heights, all of the these threats are not only against the existence of the State of Israel but the survival of the Jewish people worldwide. One’s political ideology and personal identity does not prevent them from seeing this danger as well as paying their respects to the bigger picture. We must remember the sacrifice of our soldiers of the Israel Defense Forces and pray that their memories be a blessing.

To Israelis, whether they are a current soldier, a reservist, or in national service, serve the Jewish people globally. There may be an (Atlantic) Ocean between Israel and the US or a (Mediterranean) Sea between Israel and France, though the partnership that should commence between Diaspora and Israeli Jewry could be more steadfast. For an many of use, especially an American-turned Yerushalmi (someone who lives in Jerusalem, a Jerusalemite) like myself, our loyalty to Israel is unwavering. For the Jewish university student in Los Angeles or São Paulo, their understanding of the Jewish history and the Arab-Israeli conflict may not be in-depth. Those some of us who speak to university students about Judaism or the Middle East, have seen that there are Jewish students who were not brought up with a Jewish education. These students should not be disregarded but embraced with knowledge. Both Jewish unity and campus advocacy on Israel matter; making an impact with these students will have a long lasting effect on the relationship between Israel and the Diaspora Jewish community.

Sacrifice can be seen walking all throughout the land, but can be symbolized by the ever-growing Mt. Herzl, Israel’s national cemetery. The Israeli soldier, Jewish, Arab, Christian, Druze, Bedouin or other, should be laid to rest with the honor as well as the appreciation of all those to which they are protecting. Israeli soldiers might be our physical keepers, but we must help provide a spiritual keeping for them. Projects that unify us like leKedoshim, whose goal is to “emphasize the importance of Yom HaZikaron in memory of soldiers who perished in 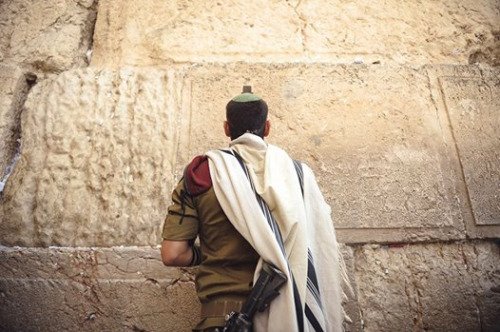 Israel’s wars and victims of terror. We hope that this project will speak to all Jewish people, both in Israel and the Diaspora, regardless of their religious or political views.” Even though LeKedoshim is a one day learning program, they are determined to assist Jewish people in learning the Talmud Bavli (2,711 pages), while striving “to bring together all the Jewish people through our learning.” We need to inspire Diaspora Jewry to take a moment and realize that without the courage and resilience of the Israeli people, most of us would not be in the position that we are in today.

On Yom HaZikaron (Memorial Day for the Fallen Soldiers of Israel and Victims of Terrorism), we pay our respects to the Israeli Defense Force soldiers that have paid the ultimate price for their country and their people. For many of us, whether we have made aliyah or help the State of Israel from outside the country, our commitment to Israel is staunch. While much of the Diaspora Jewish community is unaware of the struggles of the Jewish and non-Jewish communities here in Israel. The soldiers of the Israeli Defense Force are equipped to defend against any physical threat to the Jewish State, but not the verbal or economic threats. The Jewish people cannot bare to be without unity or our beloved homeland. While Yom HaZikaron is officially on May 1st, Diaspora and Israeli Jewry should be spending a lifetime commemorating.

*please note- this is the list of schools we usually accept, we do sometimes accept other programs.

*please note- this is the list of schools we usually accept, we do sometimes accept other programs.