A few weeks ago, President Donald Trump recognized Jerusalem as the capital of Israel. While the Jewish people do not need the international community’s recognition to know that Jerusalem, David’s City, is our capital. Though, the President did the State of Israel a great service. Following his lead, Guatemala, Honduras, and Panama, announced that they would move their embassies to Jerusalem when the United States did.

Recently, President Trump made more declarations regarding Israel and the Middle East. Doing so via Twitter, the President responded to the  administration’s decision to withhold $255 million in aid for Pakistan this year. He spoke about the billions of dollars wasted in foreign aid to Pakistan due to the lack of cooperation and honesty on important matters. Comparing the situations, the President then threatened to cut millions of dollars in aid that the United States gives to the Palestinian Authority. The United States should not tolerate countries taking advantage of its good will, would you get the whole bill every time you go out with your friends? I personally would not invite someone who speaks ill of me to my daughter’s wedding. 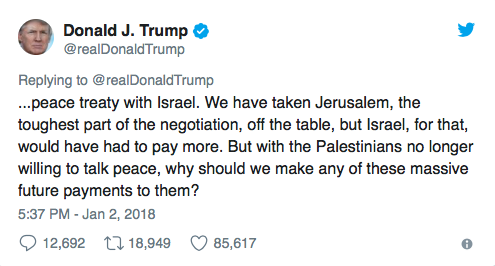 In the last year, we have seen the Trump Administration take new and innovative steps to solve the Arab-Israeli conflict. As we have also seen in the last few decades, the process has severely stalled due to weak diplomacy, which has championed flawed peace negotiations as the way to move the process forward. In the future, bold moves such as taking Jerusalem off the table, will move the process forward. It is finally time to lay down pressure on the Palestinian Authority for their incitement and sabotage in Palestinian society, and end the redundant cycle of putting the blame on Israel, who forever reaches her hand out for peace.