Leading pro-Israel activist Sarah Zoabi is not in the mainstream demographic when looking at who represents the Hasbara movement. While the movement which aims to defeat anti-Israel sentiment by explaining the truth about the State of Israel and the challenges facing it, is a movement that is mostly represented by Diaspora Jews. This is the case, whether on college campuses or living here in Israel, because we Jews not born in our ancestral land know how important it is to bring the world onto Israel’s side. 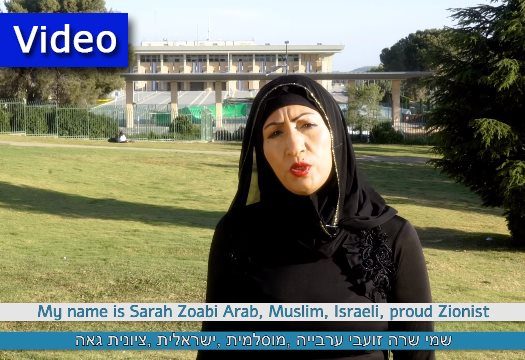 An Israeli-Arab living in Nazareth, “the Arab capital of Israel”, Zoabi knows how important it is speak the truth about the Israeli-Arab conflict. The mother of prominent Arab Zionist Mohammad Zoabi and a relative of Haneen Zoabi, a member of the Joint List, an anti-Zionist political party in Israel’s Knesset. Sarah has given strong support to her son’s Zionistic beliefs and has announced that she is too a proud Zionist, a sharp disregard from Haneen’s view of the Jewish state.

In 2015, as a contestant on the popular Israeli-cooking-show MasterChef Israel, Sarah Zoabi introduced herself to viewers as an “Arab, Muslim, Israeli, proud Zionist” as well as that she believes “in the right of the Jewish people to have their own country, which is the State of Israel, the Holy Land.”

In a video by the Pro-Israel organization Boomerang, Israeli-Arab Sarah Zoabi slams UNESCO for denying Jews’ rights to Cave of the Patriarchs.

Recently, another Israeli-Arab woman has earned the respect of the Pro-Israel community, 17-year-old Dina Abu Toameh of Jerusalem. Dina was noticed last month when she was recognized for her position as volunteer staff for Magen David Adom, Israel’s emergency response unit.

In Israel, it is very common for teenagers to volunteer in Magen David Adom, teenagers make up almost 60% of volunteer staffers, though, it is usually Israeli-Jews that assist with Magen David Adom. In Israel and the West Bank, Magen David Adom provides emergency care wherever there is a call. While Red Crescent, the Red Cross’s Arab affiliate, only serves calls from Arab towns and residents. Dina Abu Toameh will play a large role in her generation to stop the stigma of being an Arab acting in a national service role, whether as an Israeli-Arab man or a woman.

While Mahmoud Abbas was supposed to meet with Vice President Mike Pence’s on his coming visit to Israel, he was also schedule to visit Bethlehem, which is under the control of the Palestinian Authority. A trip that carries much importance for the Vice President because of his strong Christian faith. Eventually, the trip was rescheduled to have Palestinian leaders rethink the ban and lessen the current pressure, he delayed his trip until mid-January. These women, even with the possible threat of public harassment from the Palestinian Authority or angry neighbors, they can suffer from their family’s being shamed or violent acts against them. Though, these women are standing up for what is right, being an active and responsible Israeli citizen.

The bravery and courage of these women to say what they mean and mean what they say is very honorable. As Sarah Zoabi and Dina Abu Toameh are praised widely and Israel, they also deserve the complete respect of the world. Especially when in international forums and boycotts like BDS, where countries accuse Israel of gross wrong-doing and human rights issues at home, they should hear the truth from the source itself, Israel’s Arab population. Thank you again to Sarah Zoabi, Dina Abu Toameh and many others who outshine their anti-Israel counterparts by doing what they love and most of all their service to the State of Israel, their home country.