“Never Again,” has become the mantra for the Jewish People and all other nations that have been heavily persecuted against in the past. The world claimed to stand against and not tolerate anti-Semitism and racial/ethnic prejudice. As many of us think what happened in Nazi Germany of course could not take place in the United States or in other Western nations today, recently, the world was able to see the face of anti-Semitism straight from the Imam’s mouth. Imam Ammar Shahin of Davis, California’s Islamic Center of Davis had called for Allah to “annihilate” Jews “down to the very last one” as well as other deeply anti-Semitic proclamations in regard to the Temple Mount complications.

Later in the week, it was noted that Imam Shahin had apologized for his sermon, though his apology was nothing more than a farce. World Jewry must wake up and smell the coffee, these sermons are frequent and must not be tolerated. The lack of recognition and global condemnation only shows the world’s bias against Israel and the Jewish people.

This is not the first time that Imam Ammar Shahin has called for divine intervention against the Jewish People or the State of Israel. His anti-Semitism did not just stem from one sermon, but a life-long influence of anti-Semitism in the Muslim community. Here is a sermon of his that addresses the fires earlier this year in Israel as an act from the supernatural. It took the brilliant work of MEMRI (Middle East Media Research Institute) to initially view the video, translate the Imam’s words, and publicize the video for his anti-Semitic statements to reach national attention. Without their great work, Mr. Shahin’s words would have been untouched and allowed to carry forth, as his previous speeches did without condemnation. 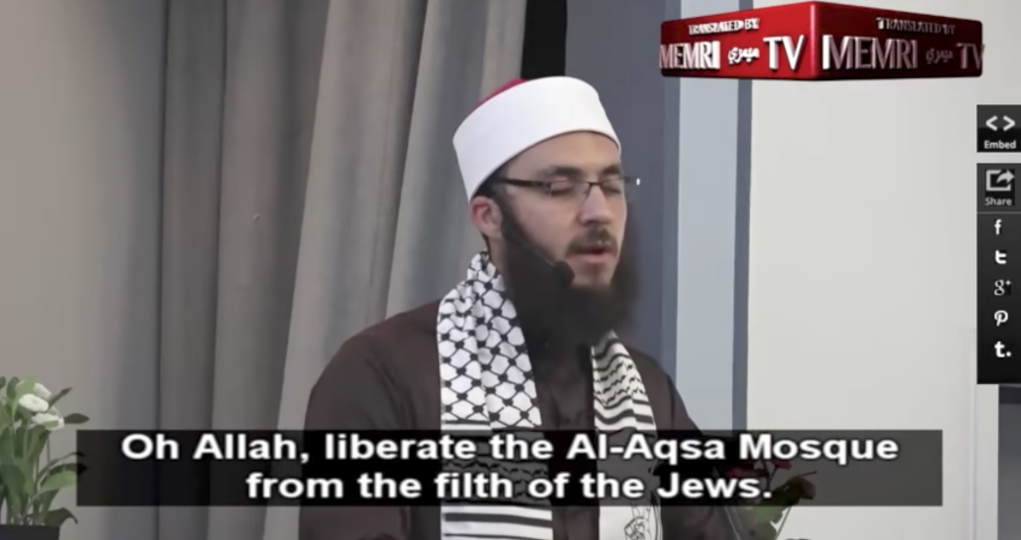 Shahin’s apology only came after much pressure from Islamic religious and political groups, like the Council of American-Islamic Relations (CAIR). Unfortunately, in the past CAIR has been accused of being linked with Hamas (the terrorist organization ruling over the Gaza Strip), failing to strongly condemn other Islamist terror organizations, as well as propagating anti-Semitism at events. Though, in this case members of the Jewish and Muslim communities met to discuss the issue. Even if we believe that CAIR has diverged from their constituent’s anti-Israel views, these type of incidents happen too often in the United States. It is also interesting that an ally of CAIR, Muslim Public Affairs Committee (MPAC), condemned the sermon but also did not fail to criticize MEMRI for publicizing it.

It rings in my head that if the shoe was on the other foot where a Rabbi gave an Islamophobic speech, the Anti-Defamation League (ADL) and every other Jewish organization come out like gangbusters to condemn it. With or without video evidence of the incident, the Jewish community would denounce an incident of that sorts; not to mention the backlash from the international media that would follow. Mr. Shahin’s prejudice cannot be buried in the pile of articles that will follow in world news, we must demand action in the form of his resignation.

While this event will be forgotten in the hearts and minds of much of the people who were notified about this example of frequent anti-Semitism, it must not be forgotten in the collective memory of World Jewry. How we can work with American-Muslim leaders to eradicate these types of sermons is the next step. Should we accept Mr. Shahin’s apology? The answer is to let him make up for his prejudice if he is actually genuine, though the truth is that this is probably not his last anti-Semitic/anti-Israel sermon.