Last month, when Conan O’Brien told the world that he was going to be filming a special in Israel for his talk show, many Israel supporters did not know what to think. While many musicians come to the Jewish State to sell out shows, there are just as many celebrities that want to gain publicity by talking out of their “you know whats” on the Israeli-Palestinian conflict. Though, between speaking to Israelis in Tel Aviv and taking in the atmosphere at the Western Wall, the skepticism behind Conan’s visit vanished. O’Brien and his crew were genuinely here to explore what Israel has to offer, as well as all the interesting characters that came their way.

Over this summer alone, many celebrities have been spotted visiting the Holy Land. NFL Football Hall of Famers came with Robert Kraft to open an Israeli football center, Brittany Spears gave 55,000 fans in Tel Aviv a great show in August, Moriah Carey came in July to promote Dead Sea Products, Rod Stewart came in June, as well as many more that came to entertain for the Israeli people. Though, most of these celebrities come to Israel to perform, many come to visit the sites and enjoy the atmosphere. The State of Israel sells herself while treating these celebrities with the royal treatment; just days into Jerusalem Conan received a private dinner with Israel’s Prime Minister Netanyahu, his wife and their dog. It is time to face the truth, the world cannot hide and try to boycott Israel’s ever expanding business markets. 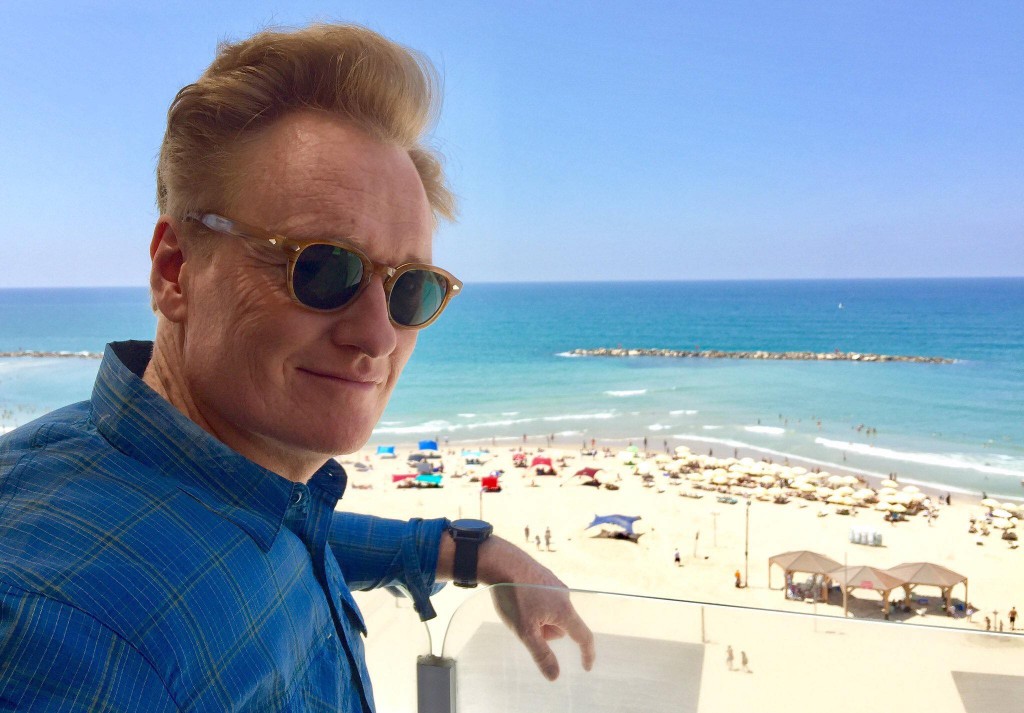 For Conan O’Brien, his adventure started on Israel’s national airline EL AL. Though, landing at Ben-Gurion International Airport in Lod, Israel, his first stop was the gorgeous Tel Aviv beach. Seeing more of Conan’s human side, he enjoyed the clear blue ocean with his fellow beachgoers. Conan then made his way to Yafo (Jaffa) Port. While on Israel’s Mediterranean coast, Conan did what Israelis do best—enjoy life.

In every video we heard about his love for the Israeli people. he adored their free spirits, open minds and down to earth hearts. He found that in Israel, one can become apart of the family in the matter of minutes. He was able to crash a Bar Mitzvah, savor Israel’s night life scene, and even stopped by some of Israel’s great technology hubs. While at Waze, a now-world renowned Israeli start-up company that specializes in GPS navigation software, he publicized a comical criticism of “that awful left turn on Montana Ave.”

When the news that Conan O’Brien was coming to Jerusalem next became known, Israel’s capital city felt an overwhelming sensation. Entering the Old City, Conan’s tour took him through the Armenian, Christian, and Muslim Quarters. Hanging out in the Jewish Quarter, he got his first experience with the natives. My Israeli neighbor here in the Old City even ran into Conan and his crew while they were doing some sightseeing. 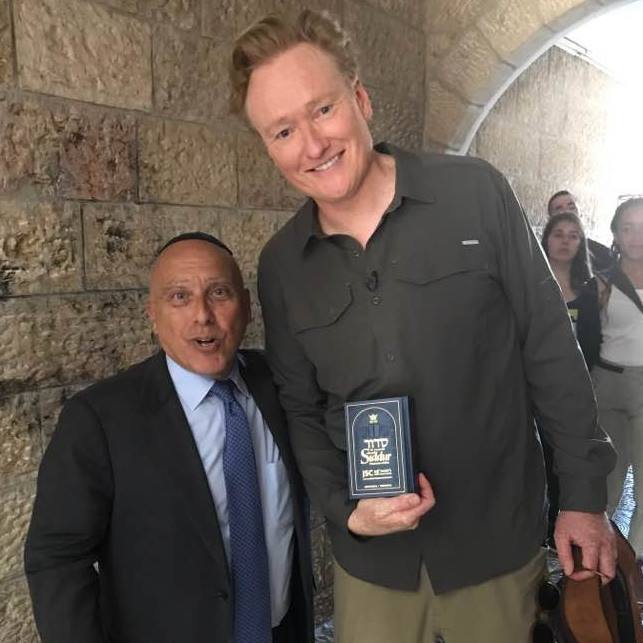 After a quick conversation, my neighbor had invited Conan into his home for some coffee and pastries, not even knowing that it was THE Conan O’Brien. After speaking with Conan myself, I handed him an Artscroll Siddur sponsored by the Asher David Milstein Educational Fund just before his descent to the Western Wall. This is the spirit of the Israeli people, inviting and generous.

For Conan himself, the good reputation of the Jewish state will last forever. He was able to see the greatness of this country, a land full of interesting characters that will open up their home to you and invite you in and make you feel right at home. Until you see the country for yourself, one cannot fathom that this is why BDS (boycotting Israel) will never succeed. This was not a political trip, it was a business trip, though this was never hidden but it was definitely a fun trip. You could truly see the real side of Conan. The only question left is which celebrities are we going to seize adventure here in Israel next? The stereotype of the Israeli is that they are rough people, but unknown to the world, the Israeli sabra (cactus) may be rough on the outside but is always sweet on the inside.